Speak, Listen, Watch, and Learn from your past experiences; all of your triumphs and mistakes. If you didn’t like the outcome and you feel that your present course is once again leaning in that direction, then it’s time to Reflect. Reflect your inner light upon your gained knowledge and look to your future; for this is wisdom and your future will shine as bright as you are willing to let it.

This morning I drew two cards from my Thoth tarot deck and placed them in front of me while sitting on the bed. The Nine of Wands and Adjustment. How succinctly put. To the point. I expected no less from the Thoth imagery and yet I only grab this particular deck when I’m feeling bold and courageous. After surviving a day like the one I had yesterday, I woke up feeling a simmering frustration within, an annoyance that felt like it was going to boil over at any moment. It was residual negative emotions and I knew I needed to direct the energy, but where? What lesson could I learn from yesterday that could make me stronger today? And better still, what about stronger tomorrows? 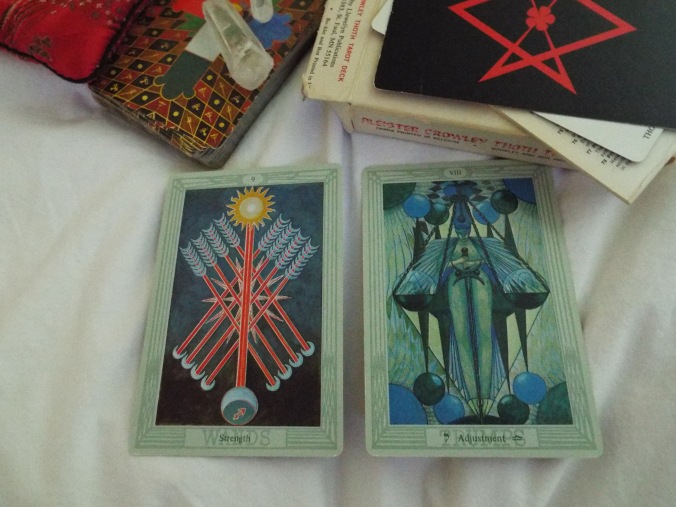 9 of Wands. Today the 9 of Wands represents both the reflective and reactive parts of me. The Sun stretches high towards the sky, his masculine energy represents taking action. The Moon reaches far into the depths of the soul, her feminine energy represents intuitive realization. It’s about blending action with realization to complete what is necessary for success. These aspects are both powerful on their own working within their elements, but here they bring their energies together by reaching across the card to become balanced with one another. As Above, So Below.

VIII – Adjustment. I look at her and I see honesty and integrity in the face of adversity. She is about standing up for what you belief is right. She is a reminder to me that If I feel the need to change something in my life, something I am not satisfied with, then I have the freedom of choice to change it. She is Justice and sheds light on the path towards balance. She speaks of being objective in the face of adversity and trust that the universal law of balance will adjust accordingly. This is also represented by the Sun and Moon, Masculine/Feminine energies intersecting in the 9 of wands.

I meditated a while on these two cards and I journaled. I wrote about how I am blessed with many things in my life, but strength and balance are hard to come by. Those two things are easy to forget when I’m living in pain and feeling the fear that I feel during a pain flare. But strength and balance are the two thing needed most during those difficult times. When I don’t have both strength and balance within my life, I begin to suffer beyond the physical symptoms. The pain then begins its personal attacks on my emotions. I start to question everything I feel is wrong in my life, wondering if maybe I deserve all of this because I’m weak. Then my self-esteem plummets.

Yesterday’s experience was a rather frustrating one as it was my monthly check-in with my pain management doctor. I needed a prescription refilled for a special compound cream. The doctor’s office had partnered with a new pharmacy and she was adamant about me using it instead of the usual place. I told her I had been trying to get it refilled there for two months but there were always excuses as to why they couldn’t. They didn’t have all the ingredients, they were too swamped, they were in-between pharmacists, and my all-time favorite: The pharmacist didn’t know how to make it.

I finally gave in and left the doctor’s office knowing that she didn’t really listen to me at all. It was all a waste of time, now I was running late and had an hour drive home ahead of me. I hurt all over and I felt drained, beaten down, hopeless and even worse, helpless. I was lucky to even have a pain management doctor; a doctor that some people will wait years to get. She could end our contract at any time and I was afraid to push the envelope. I drove away without a new prescription for the compound cream and in my frustration and rush, I forgot to get the referral to the doctor she had mentioned at the beginning of the appointment; a rheumatologist that specializes in lupus and MS and might be able to help me more than my current rheumatologist.

I am not one for confrontation, and I know I have a tendency to avoid it to a fault. But just imagining myself spending another day and another dreadful night dwelling on my lack of assertiveness was incentive enough to make changes. My fear the day before allowed me to feel bullied by someone who is supposed to help me and support me in effectively dealing with my pain. The contract between us goes both ways. Where was my voice?

I looked at the cards again. There was a difference between causing conflict and being assertive. Finding my voice doesn’t mean I have to yell to be heard. I can be effective in expressing myself, my feelings, my emotions, and my needs while at the same time being mindful of the sensitivity of others when choosing my words. I brought my thoughts back to the cards. I took a deep breath and felt my inner struggle begin to cease. What was I fighting so hard against anyway? These were simply situations that I could deal with effectively, or not. It was my choice. I just needed to find my voice.

To deal with the important matters in regards to my health, I would have to make phone calls. More than likely a lot of them. This is something I avoid as often as possible, but if I wanted things to change I needed to dedicate the day to making those calls. I spoke with doctors and their assistants, pharmacies and my medical insurance company and got some things sorted out. After the first few calls I learned the truth about the price differences between the pharmacies for the same exact medication and that the “new” pharmacy wasn’t the “preferred” pharmacy as far as my insurance company was concerned.

The phone conversation with my pain management doctor took longer than it should have as I kept trying to explain the issues I had with having the special compound cream filled by the new “preferred” pharmacy. Not only did I feel uncomfortable about the lack of knowledge and organizational skills of this new pharmacy, it was going to cost me $70.00 for 60 grams when the original pharmacy only charged me $35.00 for 240 grams. This difference was huge and could not be ignored. She was insistent on using the “new” pharmacy and I kept telling her that option wasn’t going to work for me, and on and on it went. But I stood my ground and calmly persisted knowing that there was no justification to have to spend that kind of money. I had found my voice and spoke with confidence in being my own advocate. She finally accepted what I was saying  (I had been heard!) and we ended the conversation on a positive note.

There’s now a new refill order phoned in to the original (non-preferred) specialty pharmacy and the compound cream will be here at my doorstep within the week. I also got the referral to the rheumatologist and spoke to the new patient coordinator there; the paperwork will be here the day after tomorrow. This prompted me to go ahead and switch my primary care doctor with a different doctor within the same clinic; something I’ve been wanting to do for quite some time. He has always been unfriendly and cold towards me and I choose to no longer put up with that sort of treatment in regards to my health care if I don’t have to.

I had a long overdue conversation with my oldest child’s doctor and even compromised diplomatically with my ex-husband about the bill for her latest hospital stay. I spoke to a medical billing office and we are now getting reimbursed for charges that should never have been paid for out of pocket in the first place.

Finally, and without guilt, I made one last phone call to secure a time slot this Saturday for a floatation therapy session (I have yet to try this) after my acupuncture appointment.

I accomplished so much in one day and at the moment I feel power over my life. I had tied up loose ends and dealt with the things I had been consciously avoiding. All of those little things were causing me big stress and that stress was slowly bleeding into all other areas of my life. It spiked my pain levels and dropped my self-esteem.

Later today I cleared the deck, thanked its imagery, and put it away. It was the beautiful imagery in the cards that spoke to me at a time I was willing to listen. They reminded me that I had a strong voice, I just had to make the choice to use it. I’m glad I did because It felt liberating to finally be clear and assertive in expressing my needs, especially to those I have sometimes felt intimidated by in the past. I had a right to be heard, truly heard by others. I took what I have learned over the years since my pain began and turned that knowledge into action by weaving wisdom into power. Yes, I made the right choice and have had a say in how I light my path towards a brighter future.

May you always find your voice.

Many Blessings on Your Journey )O(